You would think that if a man shaves regularly, he wouldn’t worry about patchy beard. Actually, that is not the case, particularly with dark haired men. What has been termed 5 O Clock Shadow, shows these patches very clearly as the day goes on. The other problem is that the patch may lead to a much larger area of hair loss that can extend beyond the beard into the brows or scalp too. Currently, there is no way of knowing if the patch will stay dormant or spread. So just because it is not visible first thing in the morning, rest assured it has not been forgotten! You are right to be concerned because even though your beard patch is still small, the underlying problem is an auto-immune disease.

Alopecia Barbae is the medical name for patches in the beard. It is not typically stress-induced, not directly at least, but instead is actually an auto-immune disorder. When Alopecia Barbae occurs, the body begins producing antibodies that attack the hair follicles. The antibodies are typically isolated to one patch of hair, producing a circular patch of smooth, hair-free skin that is from a nickel to quarter in size. The hairs surrounding the beard patch are typically fine, brittle and easy to pull out and the patch itself sometimes will hurt or feel like it is burning. The medical community is unsure what causes the body to begin attacking itself; however, it is commonly believed that there is a genetic weakness and environmental factors cause that weakness to be expressed in the form of an auto-immune attack. Genetics do play an important part in this and families that suffer atopic illness see this problem. Beard patches can occur almost overnight or can show up slowly over the course of months. Initially, when a patch develops you may not pay that much attention to it. Especially in the beginning when you’re determining how to grow your beard. As the patch gets larger, that is when the person takes notice and gets worried. The earlier that you start to treat such patches in the beard the greater chance you have of reversing the problem. 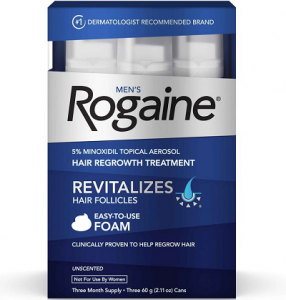 When a man goes to a medical doctor for treatment of Alopecia Barbae, the treatment options are limited, and some are severe with low success rates, lengthy treatment plans as well as side effects from the treatments. The treatments include cosmetic use of 5% Minoxidil to help encourage hair regrowth. While this treatment can help, there is not a high percentage reversal rate in cases of alopecia barbae. Steroids are another common treatment for Alopecia Barbae. Daily topical application of a steroid cream onto the beard patch is the most common way to use steroid therapy. However, some doctors will give the patient the option of a regiment of steroid injections once every four to six weeks for up to six months to help the hair grow back. However, steroids do not always work, can cause the beard patch not to not grow back permanently and the steroid can cause the skin of the beard patch to become thin and easily damaged. Minoxidil is often used in conjunction with steroids, as it appears to enhance the action of the steroids.

Read: How to shave

Aside from medical treatments, there are a couple natural treatments available to treat Alopecia Barbae. One of the most effective methods of helping correct patches in the beard is the Beard Recovery Ointment. In this treatment, there are plant extracts as well as nutrients that help the body stop attacking the hair follicles. The extracts also encourage the re-growth of hair. Rather than try to suppress the immune system which can bring about undesired effects. The Ointment helps the immune system get back on track and see the hair follicle as part of its own body again. The Beard Recovery Ointment is part of the product group of Calosol which are effective on all types of autoimmune-related hair loss.