Whether you believe in ghosts or not, visiting abandoned insane asylums in still freaky. To get you in the Halloween mood, we’ve interviewed the cast of GHOST ASYLUM. See how the show got it’s start and what it’s like being a ghost hunter.

How did the show Ghost Asylum come about?

DOOGIE: Well, we had done a few things on TV for other productions but nothing that we could call our own rendition of The Wraith Chasers. One day we received a call from Tremendous Entertainment and they asked us if we had ever done our own unscripted TV show? We told them “NO” but that would be great if we could show the world how we roll in this paranormal field down here in TN! Destination America decided to grab up the show and let us roll on with the plan that had been in place for over a year, to show America how the TN Wraith Chasers do things. The Destination America Crew has been great! They picked up 6 episodes, that have broken records on the network and on social media and we are excited for the next season. That is a short version of how Wraith Nation and Ghost Asylum was born.

How did you get involved in the ghost hunting business?

DOOGIE: I was raised up in a part of TN that had a lot of rich history with deaths involving the Civil-War. My family owns an old Civil- War Fort that had soldiers manned at that location for many years to watch the old rail-way. My grandparents built on this ground and raised our whole family there. Many years down the road my grandfather passed, leaving my grandmother all-by-herself in the old home. She told the family some chilling stories about things that started going on in the house after my grandfather’s passing. Most of the family thought that she was getting scared staying at home alone all the time. That is to be expected in this case but her stories really caught my attention for some reason. I did not judge, I just listened to her and the stories she was telling. My grandmother was a God fearing women and did not believe in Hog wash stories or ghost for that matter. She later got sick and had to go to a nursing home for her last days, God rest her soul, but I took the time to investigate here claims and she was telling the truth. I experienced the voices and shadow people she had talked about and it was downright heart breaking to know she laid there every night scared to death with no one to help or say” don’t be scared, I’m here”. I have made it my life mission to understand what she was seeing and to bring as much information to the table that I can find! This will hopefully let her know I believed her and now I’m finding the answers that she probably already knows as she is with the Master of all Masters!

What is a ghost hunter?

DOOGIE: I don’t think you can really define “Ghost Hunter”. We don’t really know what we are hunting and for that matter, we may be the hunted. I don’t think you just fall into this field, it is something that has to have a close meaning to you like an experience you just can’t explain with a logical or scientific method. I do think however, if you are going to be a “Ghost Hunter” you should be passionate about what you do, respectful and please have God on your side or whatever you look to as your source of protection. Go outside your paranormal guideline instruction booklet and use your mind to find new answers not the same ol’ stuff we have heard for years.

In the show, you visit abandoned asylums, hospitals and mental institutions. What was the scariest place you visited?

CHRIS: That’s a tough question seeing we visited 6 of creepiest locations we’ve ever been. They all had a certain and diverse feeling. St Vincent’s Mental Home in Oklahoma feels as if though a thousand eyes are watching you from every dark corner of that building. You can feel the shame and anger in the air of that place. Although they all had an effect on us as a team, I’d definitely have to say that Cannon Memorial Hospital in North Carolina was the scariest. That place is not only active with spirits, but spirits who want to interact with you in a negative way. That’s something we’ve experienced before but never to that magnitude. It caught us off guard and that’s hard to do. 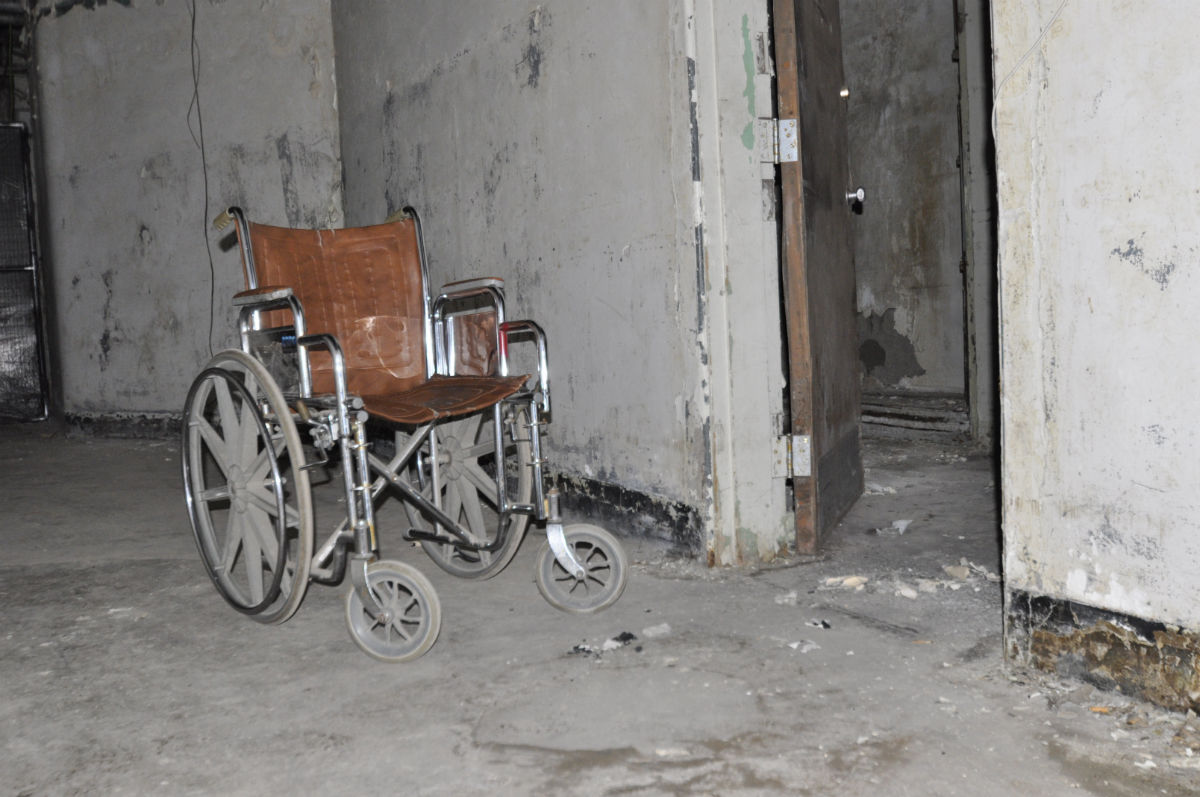 I’ve read that you use “traps” to capture these spirits. Can you explain how this works?

CHRIS: Well, we call them “traps” but they are really more like transportation devices. If you believe in the ability to capture energy then you should entertain the idea of capturing a ghost. According to research that started way before our time, theoretically speaking, ghosts are made up of energy. The reason we believe that is because we use various devices that discover fluctuations in energy. When we get responses with those instruments from attempts at communication after debunking all other natural causes, we know that there is something intelligent enough to manipulate the energy in the surrounding atmosphere. What that energy is we have not a clue, we just know something is there. Now taking that into consideration, we build containment devices known to store or “trap” energy. That’s the science bit, which is not my department but the other bit is finding a way to attract these said entities to that containment device. For that, we use various methods. Some are quite taboo but let’s face it, we’re trying to catch a ghost, we’ve already past that threshold. So why not try the insane and go where others haven’t. Who knows, it might just work.

Did anything shock you during this season?

CHRIS: I’d say I was shocked in many different ways. When we went to Old War Memorial in KY we build a trap with a battery capacitor that basically charged on its own without any outside physical influence. That tells me that some type of energy caused that. To be honest, I have a healthy skepticism when it comes to these traps but that one for whatever reason seemed to work. I was also shocked by the response to the lasers Brannon and Chasey Ray outfitted to locate shadow figures in Mississippi. When we broke those lasers out, our meters were off the charts. My brother shocked me, who I haven’t seen angry since we were kids and I body slammed him horsing around get so pissed he almost killed our executive producer. He had a really bad day and I believe that place just fed off of that and got to him. I was worried in a sense about him but I also know that everyone has they’re breaking point. His is very hard to reach but that night just happen to be the night. Guess it was magic hour.

Why do they call you “the inventor”?

BRANNON: They call me the inventor because I am the one that comes up with the experimental ideas that we do for the team, traps, detection ideas. I’m pretty interested in making new things that no one has made before and testing my abilities. I’m looking forward to next season, I want to make something where we can see these paranormal entities easier.

http://snagplayer.video.dp.discovery.com/881197/snag-it-player.htm?auto=no
What do you say to critics, that doubt the existence of dark spirits?

PORTER: There are many things in this world that have a negative effect on us both physically and spiritually. By definition, paranormal is the normal just not yet understood and 99% of what we encounter that appears unworldly actually falls within that category. There is that 1% however that everyone desires to see and experience…call it curiosity, unfaithfulness or whatever. The fact remains that we are a society of “show me the proof” and that’s just what TWC wants to accomplish. Most people have a story that they can’t explain and we want to provide you with physical proof, in today’s sense of the term, of the existence of a world greater than ours. So, to circle back on the existence of dark spirits, we find that in many religious text there was a great battle between Good (God) and Evil (Lucifer). Evil was defeated and cast out of heaven and into a lake of fire (Hell), but was also allowed to interact with mankind on Earth (influence and deceive or turn away from God’s plan). So to a critic…I would propose some statement similar to the following; You must have faith in the things you cannot see…and respect them for what they are…just as you respect the knowledge that is used to offer healing help when you visit your family doctor. You can’t see his or her knowledge but you have faith that it will allow that physician to deliver you some healing advice. Evil lurks all around us and is always seeking a weak entry point. To deny the existence of such forces in this world and not respect their existence is to provide them with the access needed to influence your actions which is the success they need to flourish.

PORTER: I personally don’t believe that we will ever have absolute success in capturing and containing a spirit. I’m willing to put the concepts and ideas that have existed for eons to the test and document our finding but remain a skeptic as to the actual ability to contain was we consider a spirit. Now, on the other hand there are free roaming energies that move about us every day and to capture and contain some form of energy I believe is possible due to the simplest of facts that we, as a modern society, do this daily with the common battery. So, in essence, could we rid a location of a ghost? Maybe, if we can rid a location of a specific free roaming energy that appears to be supernatural. Will we capture Grandma or ZOZO…I don’t think so, but who knows.

PORTER: Respect, Detect and Collect. Respect the environment you are investigating, the clients connected to the environment and the possible entities inhabiting the environment. Detect all paranormal activity, all possible natural explanations and suggestive influences connected to the client. Collect evidence and intel to ultimately validate or debunk supernatural claims and seek the truth behind paranormal activity in its many forms.
Want more Ghost Asylum? Be sure to catch GHOST ASYLUM on Destination America Sundays at 10/9C.