What do you get when you cross an ex-NFL defensive end, a hot brunette co-star, and Stephen J. Cannell (remember the typewriter paper-throwing guy at the end of shows?)? A badass cop show about a badass cop, oh yeeaah.

Living on a boat? Cool. Having a pet alligator? Cool. Being a cop in Miami? Super cool. Wearing a T-shirt, blazer, and shoes with no socks? Three out of four ain’t bad. 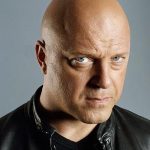 Detective Vic Mackey, from The Shield (portrayed by Michael Chiklis)

Finally, a cop show that showed to take down the bad guys, you have to be badder. Mackey was a cop who not only bent the rules, but also broke them and used them to cut your face. Tough, gritty, unnerving, and provocative, he definitely wasn’t The Commish. Too bad his shield couldn’t stop what went around from coming around.

Late 80’s/early 90’s alternative rock set to tales of high school sex, drugs, and criminal activity as infiltrated by undercover, baby-faced cops. Yes, this was actually a show, and yes, it was hugely popular.

Detective Frank Pembleton, from Homicide: Life on the Street (portrayed by Andre Braugher)

“Fiery,” “self-righteous,” and “unyielding” are just some of the terms used to describe Braugher’s portrayal of Pembleton. Here’s another one: “really good.” Good enough to warrant a ton of nominations, awards, and an Emmy.

Yes kids, believe it or not, Erik Estrada was once a sex symbol, playing Ponch: the sexy, ethnically-enigmatic California Highway Police Officer women dreamed to have pull them over. Well, at least in the scripts. 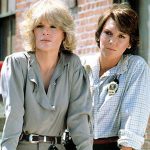 Cagney was single and career-minded. Lacey, a mother and wife. Both took to the beat as dedicated cops, regardless of gender. But because their genders are what they are, the duo broke a glass ceiling long held by the Friday’s and McGarrett’s who preceded them.

Officer Billy Costigan, from The Departed (portrayed by Leonardo Dicaprio)

Realistically, Costigan barely makes the cut, as he is seemingly nothing more than two hours of brooding, seething, anger in a fake Boston accent. But hey, with Martin Scorsese driving the car, you already know the destination is not only somewhere good, but a trip that’s going to be enjoyable.

Holdaway: Use the commode story? And with that line, we take a deliriously enjoyable tangent from what was already a deliriously enjoyable film to understand undercover Detective Freddy Newandyke and what he’s gone through to get to this very point. Empire magazine calls Reservoir Dogs the “greatest indie film of all time.” StatingTheObvious Weekly says “no shit.”

Willis’ portrayal of McClane has been called the “quintessential American hero:” a maverick with a gun, fighting terrorists some 40 stories up. Sometimes, without shoes. Die Hard remains one of the classic action movies of all time, still untainted despite its less-than-stellar sequels and “don’t see”-quels.

Perhaps the epitome bad-ass cop, Eastwood’s portrayal of Callahan has become so embedded in American pop culture it’s impossible to see his face and not think two things: .357 magnum, and “make my day.”

Sizemore’s depiction of Detective Scagnetti broke the mold, as did the film itself. Imagine, a cop on the hunt of crazed, psychotic killers… who may be crazier than they are.

If gun shootouts were like a slam-dance ballet, and co-choreographed by Jackie Chan and Quentin Tarantino, you’d end up with Hard Boiled. Or if it was done by John Woo and brought to life by two of the best partners since Butch Cassidy and the Sundance Kid.

King Kong didn’t have nothin’ on him, and neither did his badge. Harris was rotten, rough, beyond crooked, and a bully. Think Vic Mackey but without the restraints of television and about five megatons more anger. Also, a goatee.

The coolest bunch of cops a criminal could ever hope to encounter. Everyone appreciates a good underdog story, and though people may debate whether Police Academy was actually “good,” it was definitely about underdogs.

The T-1000, from Terminator 2: Judgment Day (portrayed by Robert Patrick)

Though not technically a cop, he definitely perpetrated as one and was definitely cool… no pun intended. For a relatively unknown actor like Patrick to take on a role opposite the arguably biggest action star ever– more than just “cool.”

Slow, methodical, smart, and… pregnant? McDormand’s portrayal of Gunderson was an awesome display of the tortoise (herself) versus the hare (plotting kidnappers). Just because she spoke with a slow, Minnesotan drawl didn’t mean she functioned like one. Such a super, super lady.