For first-time and relatively new users to straight razor shaving, learning how to shave with a cut-throat razor sounds daunting. This is for good reason, as it is also the time when you are most susceptible to nicks, cuts and irritation. Many straight razor shaving newbies are put off early in their “career” and the razors are often consigned to the drawer or put back up for sale on an auction site. Realising that learning how to shave with a straight razor is not an overnight task is quite important, as with learning any new skill that involves a tool of some kind, it requires patience, dexterity and of course a well-honed and shave-ready razor to complete the job properly.

Without these things, anyone shaving with a straight razor will most likely end up getting a sub-par shave, and this straight razor shaving guide should help you get off to a better start next time you pick up your favourite badger brush, cream and straight razor and set off tackling your beard. First and foremost, the sharpness of the razor is the most important thing. Contrary to popular belief, the sharper the razor is will not mean that you will end up getting more cuts when compared to using a dull razor. When you use a blade with a less than perfect edge, the razor will snag to varying degrees on your beard, and this snagging if not controlled properly will almost certainly lead to nicks and cuts. Inexperienced straight razor shavers usually put this down to their own poor technique rather than the razor.

Learning the art of straight razor shaving is the first point of call, and if you do not know how to restore the edge yourself, you should seek advice from an experienced straight razor shaver who will put you in touch with a “honemeister”, a term often used on forums to describe someone that is very capable of restoring the sharpness on the edge of a straight razor. Assuming at this stage you have a straight razor with a great shaving edge, you now need to strop the edge of the blade. To do this you will of course needs a strop, which is a double-sided strip of leather and canvas used to run the blade backwards and forwards in two strokes. One forwards and one back, each motion is referred to as a “lap”.

As such you should lap your straight razor, 20 or 30 times on each side of the strop, starting on the canvas first, and then using the leather-faced side last of all. Stropping is very important as this process restores the edge of the straight razor between shaves by removing the residue and polishing the minuscule teeth on the edge of the razor that cannot be seen by the naked eye. Learning a good stropping technique is important, as this will reward you with a great shave, meaning that you will have less skin irritation and virtually eliminate getting cuts or nicks.

Start off with taking a regular shower to open the skin pores on your face, the more steam the better. Some straight razor shavers like to use some hair conditioner or a pre-shaving product during a shower to help ex-foliate the skin and soften the beard prior to shaving. Once you have showered, run hot water into your bathroom sink and strop your razor, have a face towel or two to hand to clean up any spills during your shave, and remember to take your time during the first few months of shaving so that you can observe your technique and improve them during each future shave.

Shaving creams and soaps are vitally important to getting a good quality shave with a straight razor. Do not under any circumstances use a conventional shaving foam or gel that you would regularly use with a disposable or safety razor. These provide little to no skin protection when using a straight razor, and will make an even greater mess during and after the shave. The shaving cream is designed to provide the skin with nourishment and act as a barrier between the straight razors edge and the skin. You will be surprised at how differently various shaving creams perform, smell, and have an effect on the skins appearance and feel when you have finished shaving. 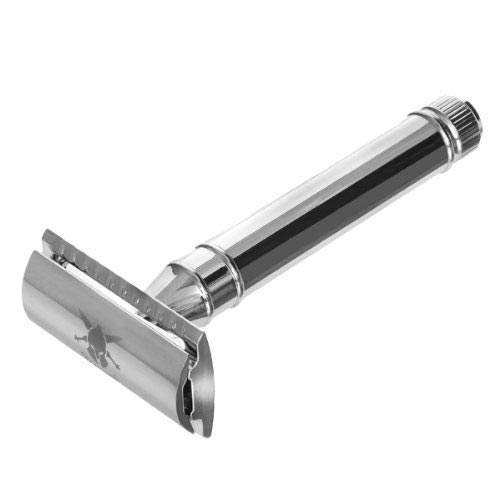 The choice of shaving cream or soap that you use is a matter of personal preference, and there are literally hundreds to choose from. Using a good quality cream is highly recommended, and although highly subjective, to start using a shaving creams such as Musgo Real, Speick, Trumpers, Taylors, D.R. Harris and Crabtree Evelyn, you won’t go far wrong. As you progress with straight razor shaving, you will identify what shaving creams and soaps suit you best.

With your shaving brush to hand, soak the brush in hot water (not boiling), and gently shake out the excess water in the sink. Then add a spot of shaving cream to the brush, slightly smaller than a small marble, wet the face, and then slowly start scrubbing your face with the brush, applying a moderate amount of pressure using a circular motion in both directions until the face and neck area have a fairly consistent coating of shaving cream.

Refrain from adding too much water to the brush or face as you are lathering up, you can always add a spot more to encourage lathering if your brush is well-loaded with shaving cream. You will know if this is the case or not as the cream will feel thick as the brush is moved across the face. Experiment with adding tiny amounts of water to the face once shaving cream has been applied until it feels right. Too much water will make the cream run thin, and not provide an effective barrier for your skin, and this will almost certainly lead to skin irritation. You can always add a touch more shaving cream to your brush and start over if this is the case.

Now that you are ready to shave, take your Dovo straight razor and pull the skin tight using your non-shaving hand, and start with a downward shaving pass on your face. Unlike using a conventional safety razor, you will soon learn that the best straight razor shaves come from using skin pulling techniques that you will learn as you go. The skin should always be tightened by your fingers or hand during each stroke with a straight razor. Shaving on slack skin will only result in snagging and cuts, so you will need to start getting used to using your other hand to help tighten the skin. The straight razor should be held at approximately 30 degrees to the face, perhaps slightly shallower. Higher degrees of cutting will again result in poor cutting results and possible cuts, so use your eyes as the razor moves during each stroke and maintain the correct cutting angle during straight razor shaving.

During your first few experiences when straight razor shaving, remember that you do not have to complete the whole shave using the straight. You are not obliged to complete the whole shave during the first stages of the learning process, and it is no disgrace to pick up a disposable to finish off small areas that you may have missed. This will not only save you a great deal of frustration trying to reach seemingly inaccessible areas, it will also greatly reduce your chances of getting a nick. Patience is the key. Once you have completed your first downward pass, you may want to try an upward pass to get a very close shave. Splash off the remaining cream from your face with some water and re-apply your shaving cream, using a lighter pressure with the shaving brush. Use a circular motion once again until the face and neck area have a good coating of shaving cream, soak and wipe the razor with a piece of kitchen towel, or an old flannel taking great care not to touch the edge of the razor and you are now ready to start the second, upward pass.

Using the same techniques in the reverse direction, pulling the skin on the neck downwards with one hand, using a 30 degree angle, start the upward strokes, gently and with consistent pressure until the neck area is done. Then pull the skin downwards from the lower chin area and work your way over the jawbone onto the cheeks. At this stage you should now start pulling the skin upwards on the cheek area and maintain the strokes with your straight razor until the cheeks are done. Shaving with an upward stroke on the moustache and chin areas is something that many straight razor shavers do, though it is recommended that you should only start doing this if you really need to, and only once you have become confident in using the straight razor.

When you have finished both passes on your skin, clean your razor by running some cold water on the blade and using a kitchen towel to remove all moisture from the razor. You can pick the razor up and blow any excess water through the gap in the scales as well. This will prevent any water from dripping down into the gaps where the pins and washers meet the blade which is where the majority of rust spots start on a razor if it is poorly maintained. Open the blade and place it on a towel somewhere to allow it to dry out for 10-15 minutes. Prior to storing the razor, you may add a tiny spot of mineral oil to the blade and rub it in gently using a dry piece of kitchen towel or cloth. After the shave you will want to relieve the skin after it has been ex-foliated by the straight razor. Like shaving creams, there are just as many choices when it comes to shaving balms and aftershaves, and for new straight razor shaving users, try using types that contain no alcohol and have skin-nourishing ingredients in them. 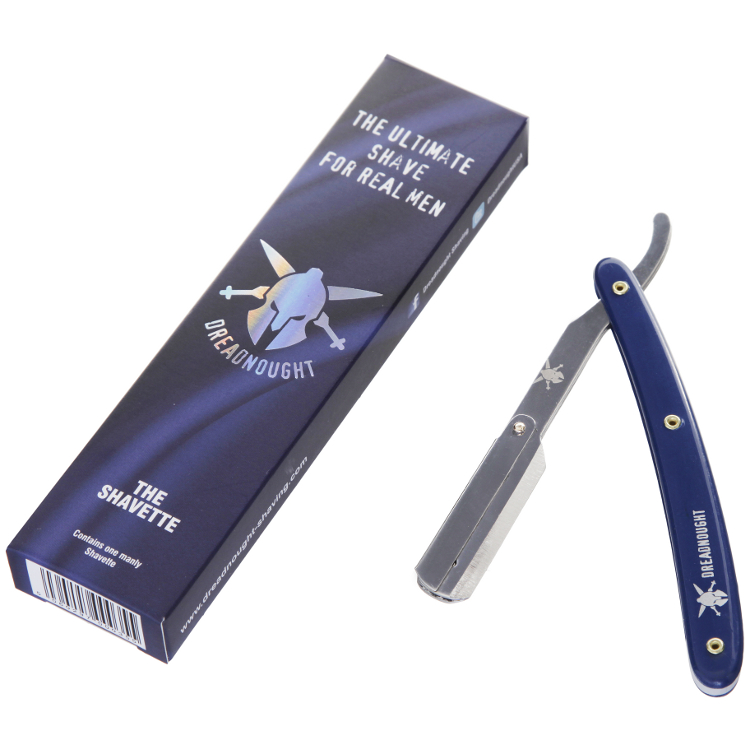 If you obtain any nicks or cuts during the course of the straight razor shave, put down the razor, clean the nicked area with a little water, and apply gently pressure with the styptic pencil directly on the cut. There will be a stinging sensation that will pass very quickly, and after a few moments the cut will stop bleeding allowing you to complete the rest of your shave.

Are you going to try straight razor shaving now? Let us know!