You can’t think of snowboarding without the infamous Eddie Wall thrown into the picture. Honest and forthright Eddie shares where he is at now along with his plans for the future, but also and more importantly, where he came from and how making ones dreams come true is the result of belief, determination, motivation, and even a few broken bones. Check out our Q&A with Eddie.

You’ve accomplished so many great things so far in your life, so what do you feel has been the crowning point of your career thus far?

Winning contests is always a great feeling. Getting a U.S. OPEN win (even if it was just the rail jam) was a big deal to me. Hitting the jump along side Ken Block in his rally car in New Zealand was pretty crazy. Winning the Red Bull Rail Storm in London was amazing too because we won 14 ounces of pure gold bars.

Do you find the surgeries that you’ve had on your shoulder and knee ever impact the way or style you ride?

Not in a huge way, but it does a little I suppose. Maybe the way I land or bend my knees etc. My knees have some arthritis, so I have to land different sometimes to make them not hurt as bad – but overall I think it just makes me more calculated.

I’ve read your comment: “I don’t look backwards, I look forward.” What are you looking forward to in the future with regard to your career?

We have been working on this website www.videohypershred.com (VHS for short). It basically documents the day to day life of riders and what it takes to get shots, win contests, etc. It shows all the stuff a normal video doesn’t show, which is sometimes more entertaining than the riding. So as far as snowboarding goes, I would obviously like to keep riding and filming as hard as I can and build VHS as well.

There seems to be no limit to what you are capable of, in addition to snowboarding you skate, take amazing photographs, as well as play a mean guitar, can you ever see any of these taking the forefront to snowboarding?

Down the line in a few years I would love to get more into photography and music. I have always loved taking photos and think it would be another fun avenue to venture down. Guitar and music are huge in my life and I would love to pursue a career in that. I have started playing solo shows and recording a few songs. I would love to get to the level of doing it professionally. 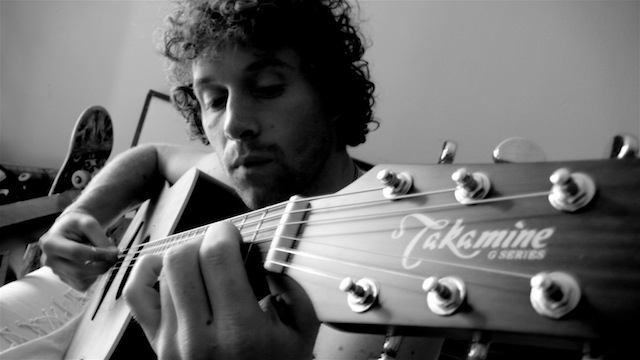 Is there a different adrenaline that comes with performing live musically than there is with snowboarding or skateboarding?

A little bit, but they’re all equally amazing. I had no idea that music could give such a rush. I thought you had to risk your life to get a crazy adrenaline rush, but I can be alone in my house and get a song down perfect, and its almost the same feeling as hitting a big jump, or playing a live show. I love snowboarding and have no intentions of slowing down, but its nice to find a hobby that doesn’t destroy my body.

What inspired you to create the “Eddie Wall Ride Invitational”?

“  I have been riding for Mammoth Mountain for a long time and they have always asked if I had any ideas for a contest… I always thought of a rail contest or slopestyle contest, but they have been done for so many years and I wanted something original. Over the past few years ‘wall rides’ have become very popular in street riding and parks, and I thought it would be fun to have a contest featuring all wall rides and name it (no pun intended), the Eddie “Wall” Ride. Its just a really fun jam session with legends, current pro’s, and the top ams. Its really fun and just an all around good time.

How has the snowboarding community evolved since you first started?

The riding has obviously gotten way crazier. When I first turned pro in 2000 a frontside boardslide down an 18 stair and a cab 900 on a jump was considered gnarly. Now people are doing triple cork 1260’s and 270ing 40 stairs… so the riding has evolved a ton. The industry and economy have played another large role. I feel like more people are getting left behind because sponsors don’t have enough of a budget and as a result pro’s are being dropped and ams are not being signed. There are so many great riders right now who have no sponsors or film projects to work with… the internet is changing a lot of stuff as well.

What do you feel like the internet is changing most about the snowboarding industry? Is it mostly the exposure, or does the suffering economy still kind of hinder the potential of that?

Its changing the film industry within snowboarding. It used to be simple, film for a season and get a video part. That was our job. Now it is getting confusing because internet sites are getting far more views then snowboarding videos, but they have less impact on the snowboard community. Its really weird actually, someone can come out with an insane part on a web site, but if there is not a premier, or a DVD behind it , then it is taken less seriously. It’s definitely a strange time for the film side of snowboarding and we wanted to start VHS to have a legit output of snowboarding and the lifestyle surrounding it.

You teamed up with Pierre Wikberg and created Video Hyper Shred (VHS), has it been as fulfilling as you envisioned it would be?

Yes and no. We started off really well. Within the first few months we were getting thousands of “views” and we had a ton of hype around the web site and project. When summer hit, Pierre had to go back to Sweden and the site kinda fell apart and was not updated for months and we lost a lot of viewers. Recently I have taken control and learned a lot about the web. I’ve started filming, editing, and posting a bunch of snowboard related stuff and gotten our views back up. Right now we are trying to get a plan together for 2010/11 and trying to make the site blow up again. It is a lot of work but I think it’ll pay off in the end. I just want to create a site that people can go to every single day and get their daily fix of anything snowboard related.

On the VHS Website earlier this year you talk about and prepare for throwing out the opening pitch at a Dodger game. You also stated that this was going to be your first time at a Major League Baseball game. What was that like for you?

It was really crazy. Going to my first ever major league baseball game and getting to throw the opening pitch was insane! I got an official Dodger’s jersey with my name on the back and the ball that I threw the pitch with. It was just an amazing experience that I will never forget. I can’t believe the places that snowboarding has taken me!

Right out of high school you went on the road to pursue being a professional snowboarder, even working as a janitor for two years before picking up a sponsor. What was this journey like for you?

Flying to the west coast with only $300 dollars in my savings and the dream of being a pro snowboarder was pretty insane. I worked as a night janitor at Kirkwood, CA and Mammoth, CA for two years before getting decent enough to get some interest from sponsors. Its crazy looking back at it, because when I first moved out in ’99, I was really not a very good snowboarder – I only knew a few basic tricks. But I knew that if I worked hard enough and rode every single day I could get good enough to get noticed. I am thankful everyday for this opportunity and life, knowing how much dedication and work went into it.

Was there ever a point where you questioned your dream, or was it always just a matter of when it happens versus if?

Actually, no, I was so hellbent on becoming a pro, nothing discouraged me. I think that is the only way it can happen. I wouldn’t take no for an answer. You can’t make any excuses and nothing can get in your way. I broke bones, had concussions, was in hospitals, and was dead broke, but I never questioned anything. I just kept a positive attitude and worked as hard as I could and knew I was going to make it. In the end it worked out and I am so thankful, and even if it didn’t, its like the quote says.. “it is better to try and fail, then to never try at all”

What advice would you give to kids out there who dream of one day becoming pro snowboarders?

Go for it! You only have one life and it goes by in a flash. Don’t let anyone tell you what to do with your life because it is YOURS, not theirs. It takes a TON of work, pain, and sacrifice and you have to be able to deal with it. Always follow your dreams and do what you love. If it doesn’t turn out exactly how you planned then you’ll still be in a better place then if you never followed your heart in the first place.

Professionally speaking is there anything out there that you haven’t done that you still want to?

At this point I am just happy starting VHS, filming, and having thrown a good contest. Besides that I just want to progress my riding and not slow down at all – which can be challenging with injuries. I am stoked to be filming and riding and want to do it for as long as I can!

“I complained that I had no shoes, until I met a man with no feet.”