Mr Ethan Hawke sits in the restaurant in New York’s Chelsea, attractively rumpled in what he calls his “rehearsal outfit” of jeans, jacket, T-shirt and shirt: any layer ready to be taken off as he “rolls around in the dust on stage”. Rag & bone is Mr Hawke’s favourite casual label at the moment, but he’s also quite a fan of formalwear when the occasion demands it: “Women love dressing up, so it’s kind of fun to play the game with them.” Having once played Hamlet, Mr Hawke is preparing to play Macbeth on Broadway. “It’s amazing, like a giant, black T.S. Eliot poem,” the 42-year-old Oscar- and Tony-nominated actor laughs.

Having first attained fame in 1989 in Dead Poets Society and later in blockbuster movies such as Gattaca and Training Day, Mr Hawke found his niche as an indie heart-throb, first in Reality Bites opposite Ms Winona Ryder and then alongside Ms Julie Delpy in Mr Richard Linklater’s Beforecycle of films focusing on Jesse and Celine, a young couple who meet by coincidence before – it emerges in this year’s Before Midnight – their now long-term relationship is faced with destabilising questions around fidelity and love. Mr Linklater can imagine a fourth Before film, but Mr Hawke feels otherwise: “After the other two it felt unfinished. Now it doesn’t.”

His desire to act bloomed when he was growing up in Texas, “like any young kid wanting attention”. His parents divorced when he was young. “My mother moved around, so every year I was the new kid at school. There was a certain amount of alienation, but you learn to move within a space, to be the person or character others want you to be.”

I project myself onto my son. It doesn’t matter if my daughters don’t like Star Wars. But when I say, ‘This is a Stormtrooper, son,’ and he’s like ‘Who cares?’, that’s difficult.

Every young person, Mr Hawke says, “thinks they’re incredibly unique in their alienation or loneliness. But in a lot of ways I was really average”. His mother was a “wild advocate of the arts” so he read Messrs Fitzgerald, Ferlinghetti, Hemingway and Sam Shepard, although he claims when he met Ms Delpy for the first time, “she was steeped in European cinema. I likedRaiders of the Lost Ark and football.”

Writing was Mr Hawke’s first passion, but at 13 he won his first stage role, and a year later got a part opposite Mr River Phoenix in the movie Explorers. “First, it was a lark but after it was over I felt as if I’d put my hand in the flame of the movie industry and got totally burned and had no desire to do it. I was in this movie that was supposed to be this giant success that was a giant failure. I felt like the 14-year-old gymnast who goes to the Olympics, but doesn’t make the final squad.” He returned to writing and has now published two novels, with two more in the drawer “with a lot about what I feel”, so he won’t publish them until his children are older.

The stage is Mr Hawke’s first love, “not because I prefer theatre to movies but because it’s a so much more disciplined art form. You’ve got to be a total moron to be terrible in a movie, there are so many people helping you. On stage it’s easy to be terrible: you have to control your body, breath and temper.” The reason British actors win so many awards, he says, is because they’re so well trained. The older actors Mr Hawke admires include Ms Vanessa Redgrave – “the Bob Dylan of actors” as he calls her – “who haven’t gotten lost to the trappings of vanity the profession lavishes on you.”

So he didn’t enjoy being a heart-throb? “I never defined myself as that. If you invest a lot in that it’s broken the mind of more than one actor. I wanted to look like Harry Dean Stanton. I always felt my boyish looks prevented me from being considered for serious roles.” Did he have lots of sex as a young star? He smiles. “It was like shooting slingshots or riding a skateboard and doing crazy jumps. I feel very lucky that when I was 23 I was really 23.” Fame, he says, is a very powerful tool, its best aspect the creative freedom it has afforded him. While he has worked hardest when “responding to failure, success has meant I am asked to play Macbeth.”

Mr Hawke is so candid his teenage daughter Maya (the elder of his two children from his first marriage to Ms Uma Thurman) recently begged him to consider her feelings after he was quoted as saying he felt he was too young when he married Ms Thurman in 1998, aged 27. After his and Ms Thurman’s divorce, Mr Hawke married Ms Ryan Shawhughes, the couple’s one-time nanny, in 2008. He has stated adamantly she had had nothing to do with the breakdown of the marriage, which produced two children, Maya and his son Levon, 11. He and Ms Shawhughes had two more daughters, Clementine, five, and Indiana, two. Mr Hawke finds bringing up Levon “much more complicated” than his daughters. “I project myself on to him. It doesn’t matter if my daughters don’t like Star Wars. But when I say, ‘This is a Stormtrooper, son,’ and he’s like ‘Who cares?’, that’s difficult,” he smiles.

So why did he and Ms Thurman divorce? “We tried to be as optimistic as we could be: we all want to believe in love and the possibility of love. The older you get, the more you realise how powerful love is. You understand the right ways for emotion to lead your life and the dangerous ways. I don’t regret marrying early. Gattaca was a great moment in my life and a great moment in Uma Thurman’s life and we fell madly in love and wanted to do all that.”

But all that isn’t always easy, especially when you’re young. “People have such a childish view of monogamy and fidelity,” says Mr Hawke. “‘He’s cheated so he’s bad, she’s cheated so she’s bad’, as opposed to a recognition that our species is not monogamous. To act all indignant, that your world has been rocked because your lover wasn’t faithful to you, is a little bit like acting rocked that your hair went grey.” Is he monogamous? “I am, but in Before Midnight there is the threat of sexual attraction to others and maintaining your sexual identity with your partner over a long period of time. Human beings are sexual beings.”

Mr Hawke adds, emphatically, “My relationship with my present wife is thrilling to me and I’m committed to it. But neither she nor I know what shape the future will come in. Sexual fidelity can’t be the whole thing you hang your relationship on. If you really love somebody you want them to grow, but you don’t get to define how that happens. They do.”

He is, however, coming to terms with growing older. “Turning 40 was super hard, I had always seen myself as ‘the kid’: I started a theatre company at 23, published my first book at 25. I went from being a really old young person to a really young old person. When you’re 35, 36, you’re still trying to be 28, flirting like crazy, staying out late. Now I’m turning my eye to the benefits of ageing.

“However, anybody who says vanity is not part of life is not telling the truth,” he adds. Indeed, the actor has always been told he has the teeth of an Englishman. “I know that’s not a compliment. When I was younger I was told they gave me character, but now I have character so…,” he laughs. “Ageing is awkward, but you have to let it happen. Flowers bloom, then they dry, but even then they have a kind of beauty.”

Mr Hawke’s ambition is to find his “voice” as a film-maker, but mostly he sounds proudest of his “amazing children”. He hopes he hasn’t embarrassed Maya again by talking so candidly. “I like to be open. If I started listing the starlets I saw naked with their bizarre oral sex techniques we’d get readers by the dozen.” Great, go for it, I say. “No,” Mr Ethan Hawke says very firmly. “I’m going to pee now.”

Mr James Perse cites a fascination with minimalist architecture and the relaxed lifestyle of America’s West Coast as his inspirations, and both influences are evident in this long-sleeved T-shirt. Blocked with graphic black sleeves, this marl cotton-jersey basic has been washed for a lived-in feel. Wear yours with sweatpants and sneakers.

Derek Rose offers the ultimate in off-duty indulgence with this unbelievably soft cashmere hoodie. An understated charcoal-hued piece, it emanates low-key refinement. Wear it with the matching sweatpants and a classic white tee. 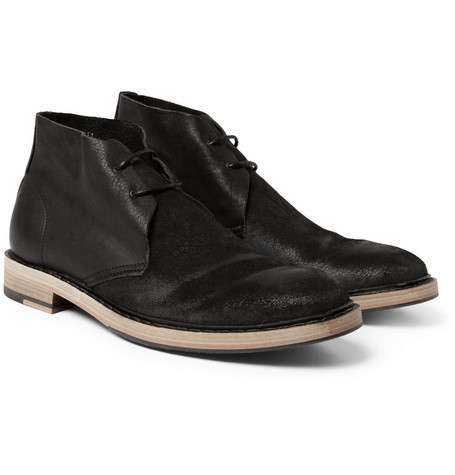 Acne applies its polished Scandinavian aesthetic to the classic desert boot, and the result is suitably stylish. Taking the rugged design from the great outdoors to city streets, this version features leather and distressed suede panels for a dynamic look.

With many thanks to MR PORTER.com for sharing; shop the inspiring Mr Ethan Hawke Collection here!