The United States Grand Prix returns to Circuit of the Americas in Austin, TX for only the third time, where the Williams Martini Racing team will make its US debut. Earlier this year, Martini®, the world’s leading vermouth and best-selling Italian sparkling wine, in partnership with Williams, announced a multi-year agreement that unites two of the most iconic brands in Formula One™ racing, creating Williams Martini Racing. The winemaker has a long history in racing dating back to the 1960s. The iconic Martini racing stripes are instantly recognizable all over Europe, but are just now making their way to the United States.

“Martini and Williams share a number of the same values – family, tradition, innovation and excellence,” said Celio Romanach, VP and Brand Managing Director for Martini. “We are thrilled to welcome Willims Martini Racing to the US, and will toast to their success this weekend.”

The Circuit of the Americas will be hosting the US Grand Prix for the third time, having previously hosted in 2012 and 2013. This state of the art facility was the first track in the United States to be purpose-built for Formula One. With over 600 million global fans, Formula One continues to draw crowds in the US. In 2013, COTA saw more than 250,000 spectators on Grand Prix weekend.

Drivers Felipe Massa and Valtteri Bottas will steer the on-track performance for Williams Martini Racing at the US Grand Prix. Brazilian-born Massa has enjoyed a successful Formula One career and has enjoyed the challenge at the wheel of the all-new FW36 racing car, while Finnish driver Bottas returns to the grid during his second season racing with the team.

Development Driver Susie Wolff will also make the journey stateside for the US Grand Prix. Wolff, only the sixth woman ever to take part in a Formula One race weekend, made history earlier this year when she took the wheel during Free Practice at the British and German GPs, the first woman in 22 years to do so.

See below for signature Martini cocktail recipes, perfect for celebrating the 2014 US Grand Prix at home.

Method
Stir the ingredients over ice. Strain into a lowball glass with a large chunk of ice. Garnish and serve. 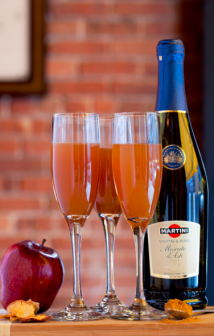 In a champagne glass, mix all but the first ingredient. Stir well. Top with Martini® Moscato d’Asti. Garnish with apple chips.

About Martini In Formula One™

The Martini brand’s longstanding relationship with motorsport and rich history of both sponsorship and participation in worldwide sporting events began in 1968 with the creation of Martini Racing™. This bold and ambitious move resulted in a pioneering sponsorship program that saw Martini become one of the first-ever non-motorsport entrants to sponsor a racing team.